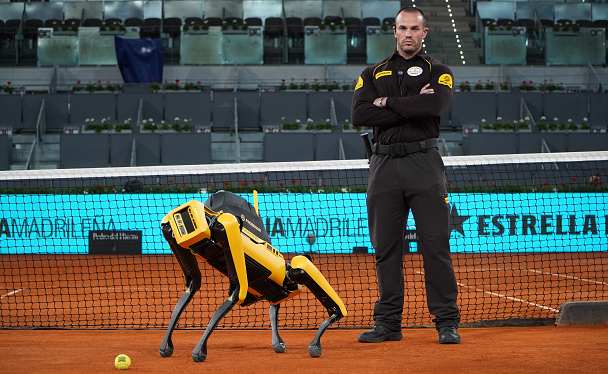 Madrid, 28 April 2022. – Prosegur and Mutua Madrid Open, in keeping with their commitment to becoming the benchmark in innovation in their respective fields of activity, have presented their security plan for the tournament that is taking place from Tuesday 26 April to 8 May in the Caja Mágica. For the first time, the device incorporates a robot dog integrated into the operations and adapted to security tasks that will help achieve the aim of increasing the security of the nearly 300,000 people who will attend this edition of the Mutua Madrid Open.

The tournament's security operation has a team of more than 200 people and is organised around three security rings, from the outer perimeter to the interior. For this edition, Prosegur has implemented state-of-the-art technological advances, whose main innovation is the incorporation of a smart robot dog that the security company has christened Yellow.

To ensure that Yellow is incorporated naturally into manned guarding tasks, Prosegur has endowed the robot dog with artificial intelligence through its GenzAI platform which enables any risk situation to be communicated to the Prosegur Control Centre (SOC) via 5G technology.

Yellow incorporates key capabilities in areas such as video analytics via GenzAI. Thanks to artificial intelligence, it can detect suspicious elements, recognise them and generate an alert to the SOC. Yellow can incorporate a wide variety of sensors that allow data to be collected from its environment, from temperature (fire detection) to gases or any other type of sensor. Yellow also allows intercommunication from the Control Centre with anyone who approaches it. These capabilities are flexible and adaptable depending on the security device in which it is going to be deployed.

In the case of the Mutua Madrid Open, Yellow can be programmed to perform patrols of the facilities, both independently (on night patrols, for example) and supervised by the Prosegur team (for example, on patrols where there are spectators). In the event that a security alert is detected, Yellow can warn the security team through the SOC, detecting risks or threats to the facility it is guarding and helping to neutralise them. In addition, it will also act as a "VIP guard" and will be able to accompany the players to their training sessions or matches.

The robot dog can also climb stairs, move smoothly over uneven terrain and adapt to any type of surface. With its artificial intelligence functions, it is capable of avoiding obstacles, creating maps and communicating its position at all times.

According to José Gil, Director General of Prosegur Security Iberia, "to ensure the security of an event of the magnitude of the Mutua Madrid Open we always need to be a step ahead in the protection of people and facilities. To achieve this, we incorporate the most cutting-edge technologies into our services and integrate them into our activities thanks to our extensive knowledge of security. In this way, we are able to detect and act on possible incidents and even anticipate potential risks. In this regard, our security model that integrates people - first and foremost -, technology and data, intelligently managed, is essential".