Thousands of books for readers of all ages and an ATM. That is what you will find in the library buses that the Provincial Council of Salamanca has launched as part of a pilot programme that promotes reading at the same time as providing a basic financial service. 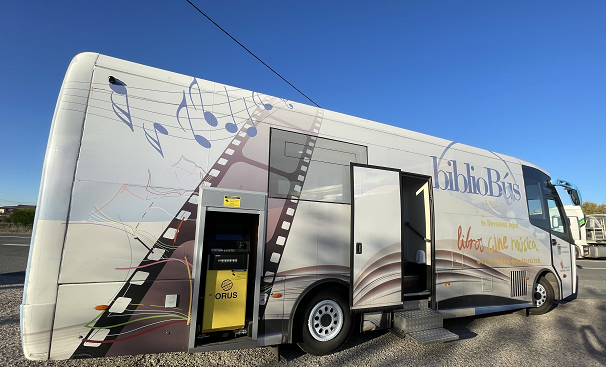 Monday- Tarazona, Arabayona de Mógica and four other municipalities. Tuesday- Martiago, Aldea del Obispo and others. Wednesday- Robliza de Cojos and Aldehuela de la Bóveda. Every week, the Provincial Council of Salamanca launches its library bus service around the roads of the province with a clear roadmap. The aim is to bring novels, essays, magazines, children's and youth literature and home videos to about 200 towns in the province that do not have their own library or have one with a very limited collection of publications. In total, there are four vehicles that cover 16 different routes, visiting each of the villages once every four weeks. They carry 3,500 titles that are part of a total collection of 92,988 and that are renewed after every trip. They have a distinctive appearance- large buses decorated with fun under the sea scenes- to encourage reading in this rural part of Salamanca, where most towns have less than 500 inhabitants.

From now on, two of these library buses that travel through the Salamanca regions also feature a new service: an ATM where you can withdraw cash using cards from any bank. The initiative will benefit 130 localities in the region. The innovative service is the result of a pioneering agreement between the Provincial Council and Prosegur Cash, a company that has been developing a pilot programme in the province of Salamanca for the past two years to combat the financial desertification of 'empty Spain'. As explained by one of the brains behind the initiative, Benjamín Crespo-Menéndez, representative of Cash Rural Spain, "thanks to our ATMs, 7 locations in rural Spain have access to cash in areas where there has been no bank branch for years". Several of them are part of the southern region of the Sierra de Francia, on the border with Las Hurdes, in the province of Cáceres. It is a particularly isolated and unpopulated area where the main municipality, La Alberca, barely exceeds a thousand inhabitants.

Reducing a significant deficit in the rural environment

Alfredo Garrido García, manager of Banking Solutions and Business Development at Prosegur Cash, explains that initial contact with the Provincial Council of Salamanca was established around two years ago: "At that time, we started working on a pilot programme to bring ATMs and cash to areas of Spain without banking services. We started in Guadalajara and very soon began to focus mainly on the province of Salamanca, one of the most affected by underbanking in Spain."

Galinduste, Hinojosa de Duero and Topas, three towns with less than 700 registered residents, as well as others such as Villarino de los Aires and Aldeaseca de la Armuña (and soon San Esteban de la Sierra) were the first to benefit from the programme, with the service and maintenance cost financed out of the municipal budgets.  "The Provincial Council told us that they did not think that installing ATMs in all the municipalities where there are currently no bank branches was viable in the short term, but they proposed the alternative of installing them on board two of the vehicles in its fleet of library buses," explains Garrido.

According to Policarpo Ledesma, general sales manager for Prosegur Cash Iberia, "it is a solution that can help to reduce a significant deficit, because many of the people who live in these areas need to have cash for their daily expenses". Ledesma also explains that "we are highly motivated by the synergy being created and being part of this commendable cultural initiative that consists of bringing books to those interested in reading them." As Crespo-Menéndez sees it, "we think it is opportune that the inhabitants of these sparsely populated areas that are deprived of basic services can enjoy both a basic financial service and an active reading promotion programme."

Other councils have shown interest in this service, according to Garrido: "The service could reach other towns in the very short term. These are areas that were traditionally served by local savings banks, but these banks have long since begun to close many of their branches because they were not profitable." However, as Crespo-Menéndez points out, 'bankless Spain' does not only affect particularly deserted or bordering places, but everywhere in a way: "Even in the northern regions of the province of Barcelona or in areas of the two Castile regions near the metropolitan area of Madrid, we frequently see populations that have been left without any financial services and whose inhabitants have to travel to get cash."