Due to the acquisition of Transvig 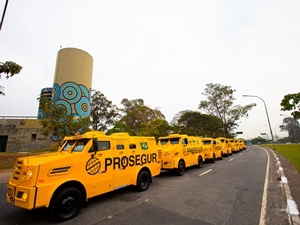 Madrid, October 21st 2014. – Prosegur has announced today the acquisition of Transvig, a security company from the region of Roraima, in Brazil. This investment makes Prosegur the only one company in the industry that operates throughout the national territory. Furthermore, this operation increases its business in the area of cash in transit and asset surveillance and reinforces itstechnological services in the north of the country, assuming Roraima’s operations, which reach an annual turnover of more than €6 million.

Due to this agreement, the Company incorporates 500 new professionals to its workforce in the country, along with a fleet of 10 vehicles, including armored vehicles, light vehicles and motorcycles, as well as the management and maintenance of 67 ATMs, distributed between the capital region, Boa Vista, and other metropolitan cities in the state. "This acquisition represents an important achievement for Prosegur in Brazil and strengthens our position as one of the largest private employers in the country, with more than 53,000 employees in the territory," said the Prosegur's CEO in Brazil, Gonzaga Higuero.

The negotiation achieved with Transvig is another step in the business expansion of the Company, based on organic and inorganic growth in key regions of Brazil. Thus, in 2012, Prosegur acquired Nordeste Segurança and Transbank, which allowed the Company to begin offering services in key areas such as Pernambuco, Ceará and Alagoas, among others.

During these years, Prosegur has consolidated its leadership position in the countries where it operates. Nowadays, the Company is present in 17 countries on 4 continents, and aims to be leader in each of the markets it serves through comprehensive security solutions.